A return to the Lochnaw roach.

The trip was booked and paid for, Lochnaw roach were the target for all of us but my personal aim was the 3lb fish that so far had eluded me.  Two at 2lb-14oz at the top of my list on the last trip and two at 2lb-13oz at the top of the list on my first trip in June, now for that 3lb to top the list. 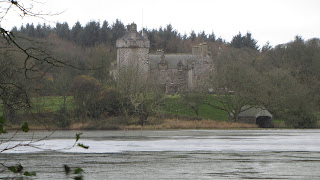 Castle and boat house across the loch.


That was the plan, but as the date approached it looked less and less likely that we would even catch, the reports were dire.  Our four man group in June had caught 52 roach over 2lb, now that seemed beyond any possible dream as group after group struggled to even catch any fish and one or two of the 2lb plus roach became the normal result.  We seriously considered cancelling our planned trip and fish in the south instead, but the group before our trip reported two over 2lb and we decided to go, but maybe not for the full week. 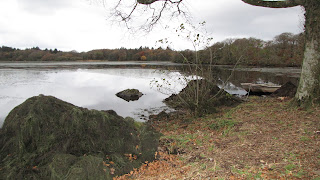 Lots of weed has been dragged out to make swims


Kevin, the fishery bailiff had been busy with lots of work on the banks to open areas within the tree lined banks to make space for swims.  Then there was the ever present weed that almost defies any attempt to drag it clear to create an open swim, but he had succeeded in a couple of areas, one of these being off Sir Stairs Island where John and I had caught in June.   It was decided that I would start on the island, and John Found along with David Cook, my companions on this trip, would fish on the road bank swims that had produced so many fish in the past.  The two large roach of the previous week, 2lb and 2lb-9oz, had come from these swims, one from each, it had hardly set the world on fire but we were hopeful in that at least the weather forecast looked positive, even if a bit wet. 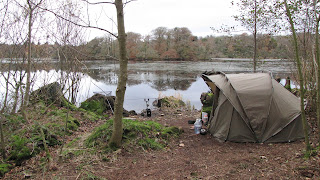 Arriving on the Saturday at about 3:0pm did not give me long to get my gear around to the swim, the lads were not going to start early Sunday so they helped me with my tackle.  The recent rain had the loch up at the top of its normal level and in places the ground was extremely muddy, in some spots I had to take the tackle through the mud bit at a time, the weight would have sunk me to my knees.  With darkness falling by 4:15 it was indeed dark before the camp was up and rods set with just the hook-links to be attached.  I would be starting at 6:30am which was about 45 or 50 minutes before dawn since I think this can be an important time to have baits out.


I did my part in that the baits were fishing well before dawn, but other than a few small roach I saw no action.  My tackle set up was very similar to that used on previous occasions, 3 inch hook links on helicopter rigs, 4lb fluorocarbon to a size 10 Drennan Carbon Chub hook for boilies and artificial corn, then size 18 super specialist for the maggot rigs.  The rods I used were the Drennan Medium Feeder with a 3oz quivertip attached.


Sport has been very slow of late on the loch so I kept the loose feed down to a minimum, 3 pint of hemp; one can of corn and perhaps 500 gram of method feed.  Add to this a couple of handfuls of boilies and that was it over the four days of the stay.


The Sunday passed without sight of even a 1lb plus roach, lots of smaller fish but nothing big and the following day went along a similar pattern.  Then about 5:30pm the right hand rod indicator shot to the top of its reach and the reel spun backwards, the strike was good and the fish was hooked.  A 200lb catfish can pull very hard, but it is no more exciting than a big roach on the right tackle, this one gave me some heart stopping moments before he came to the net.  At first I thought it was one of the remaining brown trout, but then I saw the silver flash in the torch light and immediately worried about the hook hold.  I have already said he went into the net and when I looked in I could see he was indeed a very big fish, but I’ve had a few from here now that fell short of the 3lb mark, would this one make it? 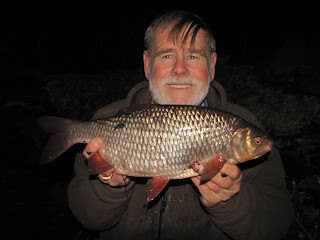 As with so much of this trip it was raining but I took little notice of that as the digital scales settled on exactly 3lb and I shouted to John across the lake to celebrate achieving that target figure.  Once the fish was safe in the landing net I called John on the two way radio, no phone signals here, and confirmed the weight inviting him and Dave to come around since I had a Queenford net that would safely keep him if they wished to.  Both decided that the trip was too difficult in the dark and left me to take the photos with self-take facilities.  No problem there, it just meant that the camera was set up in the brolly camp and I positioned myself just outside the door.   With self-take it is just a matter of taking your time, make sure everything is in place and ready for the photo before you bring the fish from the water.  The unhooking mat gives you your position and the distance from the camera lens is experience, fire away and adjust your potion to suit what you see, it cannot be more easily done and achieved.  With the photos done I settled back and waiting until the 7:00pm mark, this was the time I had decided to return to the lodge for a social break until 10:00pm, I would then return to my camp and put the rods back out again to fish through the night.


At 6:30 am the following morning the alarm rang out and I was up to re-bait and recast fresh for the morning feast as I hoped, it was not to be and yet again the day passed without a big fish showing.  Strong winds and consistent rain made it hard going, but at least the temperature was good and I believe we had higher temperatures than those in the south of the country.  This time I waited until 6:30pm before I got the positive bite and fight off the big fish, but at 2lb-14oz it was worth the wait.  Specimen fishing is generally hard going, and good fish can at times be easy to catch, but I believe that when they come as hard won as these have done, you appreciate them so much more.  By the time photos had been taken it was social time and I retired well happy with my results. 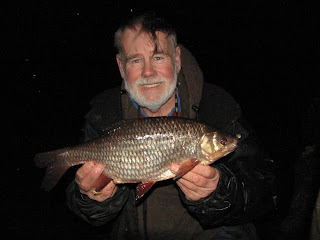 
Following that there is little to report, the night and following day gave just the usual suspects of smaller fish to about 1lb, dusk saw the 1000 plus rooks that descend on the loch to roost each evening and yet again I had a positive take at about 6:00pm.  Problem was I had been folding the camp away and for some reason the drop back bite did not sound on the Delkin.  I looked up and saw the bobbin on the deck but no fish was hooked when I reeled in so I’ll never know just what I missed.  Lady luck had smiled on me twice so I’ll forgive her the lapse on this occasion saving a bit for the next trip or two.  I left the lake that evening with mixed thoughts, we had agreed on a Thursday morning departure and indeed the other two lads had suffered the big fish blank that had occurred for so many of the guests here of late.  Hopefully by the time our Spring trip rolls up the fish will have grouped up and respectable catches will again being made, we can only hope. 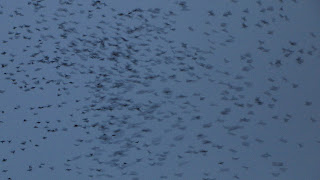 Blurred by movement but all the visible sky looks like this small section full of rooks.
Posted by Travelling Man at Friday, November 16, 2012