Now it is quite obvious that we all go fishing in order to catch fish, but if you fail in that task is it the end of the day?  Yesterday I was zander fishing on a lake with doubles availble, and good bait to attract the fish, but they would not play and I blanked, what did save my day was a sight I had not seen before.

Probably the best part of 100 yards away I noticed a number of flashes of bright red amongst the trees, robins was the first thought that came to mind, but that was quickly dismissed -they hate each other at times outside of the Springtime.  As I watch I became more and more interested, not being able to decide what I was watching.   With no binoculars to use I took the next best thing which was my camera with its 20X zoom lens and Image Stabiliser to make it possible in the hand held mode to take photos with maximum zoom in play.  It can be quite a problem looking through the camera with that zoom working to find just exactly what you are trying to find.  Even when I found the flash of red a number of the shots just showed the birds behind a branch or some awkward postion that was of no use.  Digital photography is brilliant in that you can take as many shots as you like - it does not matter as you delete the bad ones later, but here the first photo shows the image as captured, while the second is close cropped to identify the bird - a male bulfinch. 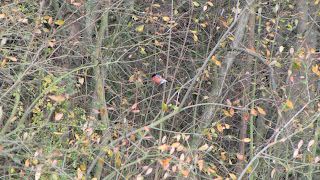 Original shot at about 100 yrds. 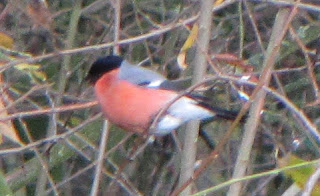 One of several male bulfinches present.

Normally these birds are shy, retiring birds and you only get a fleeting glance as they move away from your presence, to see this flock at play, well it made up for the blank - almost!
Posted by Travelling Man at Monday, December 05, 2011