River Roach - Another trip south with a grand reward of big roach.

Anticipation is a wonderful experience; it allows you to dream that anything is possible and with the three days planned this week that was certainly true.  As I mentioned within the last blog update, I would have days on the River Kennet, then the Roach Lake and the last day on the River Test, all venues able to supply a dream fish.
At almost exactly the arranged moment of time at 8.00am I drove into the venue car park to meet up with John Found, not bad timing over the near on 100 miles through traffic.  Although the day was forecast to be quite mild it was cool to say the least, and a fairly strong east wind bit into any exposed skin.  Wrap up warm since it is the middle of November and set off down the bank.  John allowed me to choose what appeared to be the going swim at the moment and his local knowledge definitely helped in this choice as the day was to show.
We had agreed that with the fairly noticeable drop in air temperatures over the weekend it was possible the fishing could suffer and it was to be a case of slowly does it with the baiting approach.  We were both set on a caster and hemp attack, arguably the best option for the low and clear river conditions we had in front of us.  The Kennet rarely shows the effect of floods but now it was getting into a shallow levels rarely seen in modern times, rain is urgently required.  The low water itself is not too much of a problem, but combined with a good drop in temperature the writing was on the wall. 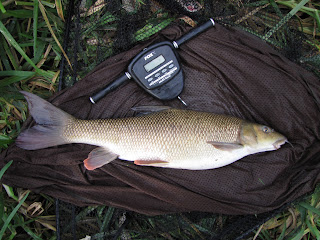 Not a double but welcome on a cold day.
Sure enough the fishing proved to be tough, I did manage three barbel to a best weight of near 8lb, but John suffered his first blank of the season on this section of river following a lot of trips with numerous double figure fish under his belt.  Driving to his house where I would be staying I could only think that at least the roach would not be so temperature dependant.
Bright and early next morning we were making our way even further south to the roach pit.  That bright and early bit was in fact misleading, there was a heavy mist about and we did not leave the house until 8:00am since the roach fishing seems to improve as the day wears on.  Arriving at the lake the mist had gone and just three overnight stay carp anglers were present so no problems in getting a swim.  Purely for comfort we chose to have the slight breeze off our backs, again the wind had an edge to it so why not be as comfortable as possible?   I had contemplated the use of a float rod, but experience here suggests that the quivertip approach would produce far better results.  Short hook-link on a helicopter style rig, size 18 hooks to 3lb line and a small swimfeeder was soon set up, and I cast into the shadow of a tree to give me a constant target for the day ahead.  Red maggots were the bait this time and with the use of a small catapult I sent out a pouch of maggots and the same of hemp hoping to get the attention of any roach in the area.  It did not take too long before a positive pull on the tip resulted in the first roach of the day for me and at 1lb-14oz it was to end up as my best weight for the day as well. 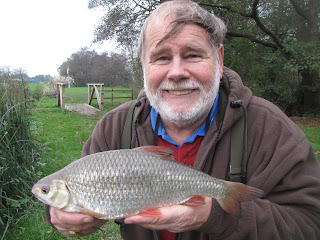 First roach of the day at 1lb-14oz

The fishing was certainly slower than previously experienced, but slowly the total built up, and John laid the marker for the day with a fish of 1lb-15oz followed soon afterwards with a 1lb-12oz specimen.  No matter how many times I see a large roach caught I still get that grand feeling of having seen such a wondrous looking fish, deep of body and steel blue in colour, it is little wonder that they are many anglers favourite species.  We made our way back to the house thinking perhaps a few more fish would have been nice but at the same time we had a good result for November with pleasing to weight specimens for both of us. It was now time for the trip I looked forward to with most anticipation, which was to the River Test.  I am fortunate enough to get the occasional invite to fish in the grounds belonging to Dave Steuart of salmon fishing fame.  He lives on the banks of the river and looks out of his dinning room window to watch salmon leap and roach roll just a few yards away.  My target was a 2lb plus roach and trotting was the order of the day with maggots as bait.  John was to try a slight variation in that he would use casters to see if that would produce a better class of fish. 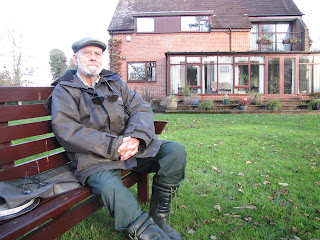 Dave will sometimes move to the riverside to watch the fish

Again the day began with mist and slight drizzle, but after stopping for a very welcome full English breakfast, it was now looking quite good, and the forecast was dry and fine.  Setting up the trotting gear I used a 2.5 SSG chubber float, the bulk shot set 18 inches above the hook using the AAA size with just a BB as a tell tale shot about 6 inch above the size 18 hook.  The rod was the usual Drennan 14ft Ultralight that has landed so many of my roach and chub specimens without too much worry.   On this venue the order of the day is lots of bites from small grayling up to perhaps a maximum of 1.5lb; add to this a good mix of brown trout with possible double figure specimens to be caught.  A few chub and dace are there and of course the roach.  These might go up to the 3lb mark although none of that weight have been taken in recent times, a 2lb specimen is there, but again not too many and it remains a very challenging target for the visiting angler.
The morning session had us both worried with very poor results to the point that John said it was definitely the worse he has experienced there over a good number of years.  As could be expected with the lack of rain the river was very low with a flow that was slow compared to that normally experienced.  There was also a lot of suspended matter that Dave suggested was coming from a trout farm just upstream of our location, tons of crap going into the river on low conditions certainly cannot be good.  I wondered about trying different swims but my result stayed similar, a few grayling and just one brown trout of about 4lb, not what the doctor ordered.
John had taken a couple of roach amongst very few fish, but at 1lb-9oz and 1lb-12oz they looked very good, now having been to the bottom of the stretch available, I returned to a swim below John’s position.  It was now early afternoon and my first dozen trots through the swim [previously fished without success] I caught a grayling on each run through.  Things were looking up although nothing seemed different to me, same weather and the river had not changed never the less the next trot down saw the float disappear and the strike met that ‘thump-thump’ that suggests and roach.  A couple of those grayling had dropped off the hook as I tried to bring them to the net, when I saw this roach I prayed pretty hard for it to stay on and it did.
Lifting it out I could see it would easily be the 2lb target I had in mind and the digital scales soon confirmed that with a weight of 2lb-6oz, brilliant!  John quickly got the photos done and the fish was returned to continue on its way to that 3lb weight, hopefully I could be about to catch it.  That improvement in the catch rate continued for both of us and a good number of 1lb plus roach came to the nets though none beat the 1lb12oz for John, and of course the 2lb 6oz specimen for me. 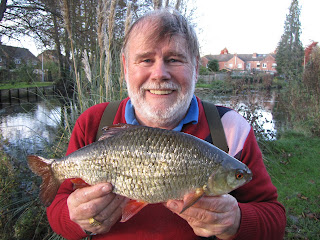 There it is then, three days in the south, different venues and good fish caught with that last gem for myself.  Plans are already being made for a return and this time it may well be the Hampshire Avon and those big chub that are the target, I’ll let you know.
Posted by Travelling Man at Friday, November 18, 2011