Sometimes the Gods smile just a little bit more than usual, I had said that a return to the River Derwent was in order since I felt my result on Thursday, with just one barbel, was below what I thought it should have been, well I returned.

Arriving early in the afternoon, I spoke with a regular visitor who had been there from 8am, he related that his car had been frozen over before he left home, and the field was white over when he arrived. Not a good start for a barbel fishing session, if you add in the totally clear, blue, sky that hung above us like a big blue blanket then things looked bad. Unlike a blanket though, this sky effect just threatened yet another cold night to come.

I settled into my swim and cast out the two pellet loaded feeders, one with the usual 8mm pellets on the hair, and this went across towards the far bank. The other carried a 15mm well glugged Monster Crab boilie, and this went downstream and perhaps a third of the way across. The afternoon passed but nothing disturbed the rods and the regular visitor faired the same, he decided he had fished long enough by the 4pm sort of time and left to avoid the football crowds, leaving me on my own. It must be a sign of the times when I can be on a good section of river, on a Saturday, and have no-one else there, recession or just a sign of falling interest in rivers, I'm not sure, but the old adage of use of  "Use it or lose it" comes to mind.

Around 6pm another angler appeared and dropped into the swim vacated by the previous chap, just like musical chairs, but when it happens we don't know by who, or when our chosen swim was occupied prior to our arrival. Often when poor results are attained this could be the cause, the previous angler could have already given the fish a hammering, or loaded his bait in when he left, you never know.

Darkness fell and still no fish, but I hoped that the warmth of the day would have beaten that cold start, sometimes the early frosts of the season are not too detrimental. About 7pm I finally got my barbel bite and went on to land a fish of about 6lb, this was followed by others of 7lb odd and 8lb odd with a nice fat 9lb-8oz fish coming between them.

It was now just after 8pm, and although my original thought was to pack up at 8pm I had now decided that with the fish feeding I would stay until 9pm.  It turned out this was a good decision as I then landed a fine barbel of 11lb-4oz to equal my river pb. 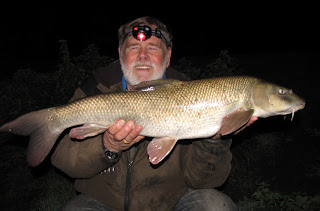 11lb-4oz Derwent double
It was even better when a 10lb-8oz fish soon followed. 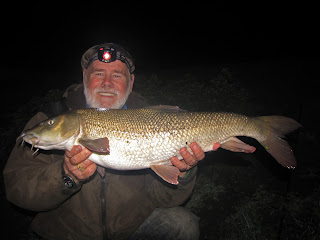 That 10lb fish came just after the 9pm mark, but by then I had already decided on 10pm to finish - you must take advantage of the good days to make up for all those bad ones. The sport slowed down now and it was near to my deadline time when I caught yet another barbel of 9lb-6oz. I was tempted to call it a day but with seven barbel along with a couple of small chub already landed I thought of the possible long cold spell that might hit and decided that 11pm did not sound that late after all.

It was getting quite chilly, but the adrenalin was keeping me warm as the minutes went past with just the occasional knock on the rod tip to suggest fish were still out there. As that 11pm time approached I hovered over the rods, pack up or not, time to decide. Then the pellet baited rod sprang to life and I was playing a good fish yet again. Great fun, and exciting, but then while this was going on the boilie bait on the other rod was taken, all I could do was strike and make the rod safe, leaving it way back on the rod rests while I landed the first fish. After one hell of a tussle I ended up with two barbel, both still hooked and laying in the net to recover. I could see that the first of these was a very good fish, and when I finally got the smaller of the two unhooked and released, I got round to checking it properly. I had put it back in the water while I sorted out the bits and tackle laying around, but when I got him out and weighed him I got the great surprise of looking at a figure of 12lb-2oz for a new river personal best again, life can be good at times. 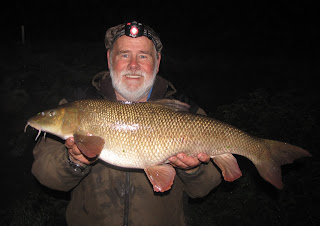 New river personal best 12lb-2oz.
As a matter of interest the fish fell fairly evenly between the two different baits, it seems they were ready for a munch, and I was there to provide it.!