I don't like the sun when it shines all day, and the temperatures soar through the roof.  In these conditions I will be walking the river bank looking for the nearest tree in the hope that it will be a little bit more comfortable under the shade it provides.  One big problem with this idea is the fact that in the last week nearly all the swims I fancied did not have a tree near them, then there was the other point that where the trees did provide shade, I didn't fancy the swim next to it.  The result of all this pondering was that I spent a few faily uncomfortable days on the River Trent near Nottingham for very few fish, they just were not playing.  A trip to the Teme did provide some shade though.  That said, I was looking at the bed of the river in places not seen before, the water levers are very low, and I can only hope that we have significant rain before too long. 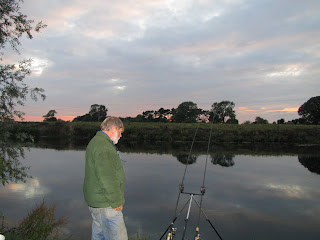 Waiting for the bite on the Trent.

I have noticed a significant difference between the written word on nearly all the computor blogs I read, and that read in the weekly and monthly magazines, it seems that anglers do have blank sessions occasionally!  I know there is very little kudos in writing about a blank - what can you say- I blanked!  You can describe the wildlife, the insects and butterflies, birds flying over the scene and crystal waters trickling past your idilic fishing platform, all this, but in the end you blanked!  So I ask myself is there any point in writing about a blank session or period, fair enough I did catch a couple of barbel including a nice fish well over 9lb, and other chub that were just a pest at the time, but why write about it? 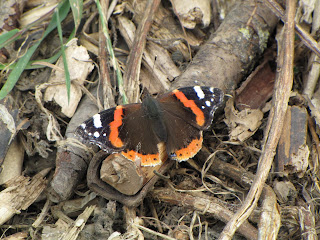 It is often said that "90% of the fish are caught by 10% of the anglers fishing for them."  Add to this my own thoughts that the writers such as myself often provide the dreams and asperations for those up and coming anglers hoping to replicate our results.  Now I have my answer as to why we should write about blank sessions.  If that up and coming angler is reading the monthlies and those anglers never blank, then he may well get disheartened when he is blanking time after time.  He follows the advice and tactics described, uses the brand of bait that the author has promoted, and often he will even know he is fishing the same waters as the author; but while he has blank days, it would appear the author does not.

I am sure you will recognise this situation, I can, from my early days when I did exactly as I described earlier in this blog, I copied the written word to the letter, and blanked on more days than I caught on.  I now know many of those anglers whose name appears with some regularity in the press, either reporting big fish or writing about them.  I am also aware of the hours, days and sometimes weeks of effort that goes behind many of those features and catches.  You watch a vidio and see a few nice fish caught, one after another, you did not see the editing and continuity that took place over the days the filming was done. 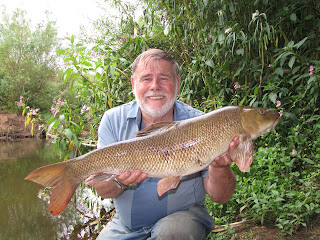 Nice way to avoid the blank that day.
So, if you reconise part of this blog as applying to your fishing, take heart - all anglers have blanks, only the numbers alter.
Posted by Travelling Man at Sunday, July 31, 2011