It can be surprising how much time is taken up in producing a book from scratch, the actual writting process is only the very beginning.  You can of course get to the stage of a finished manuscript, and then if one is available that has accepted your work, pass this to a publishing house where they will complete the process.  Often in today's world it is more common to follow the route of self publish where the author takes responsibily, and the cost, of bringing the book to market and then distributing the copies to the reading public.

I've completed the stages of writing the book and having that worked proof read by some-one far better educated in the English language that I.  Then you check it again to ensure that the spirit of your work is still there, though good proof readers do this automatically.  We now arrive at stage that I am currently at, this is where the book is laid out with photographs and text placed on the pages in a readable fashion.  Here again the finished product is required to be proof read yet again, and the Wednesday and Thursday of this week were taken up by my need to do just that on a few of the chapters.  It is strange since I normally read books in a scanning fashion where not all the words are individually read, now I need to take the time to ensure I read what is actually there, almost word by word.  Within the process of laying out the book it seems very easy to either loose words or sections, or alternatively duplicate those already completed.  One big advantage to me is the ability to see what the final product will look like, and in this respect I am very excited.  Mind you, I will have read the whole thing about a dozen times so it can be a little repetitive!

Still, back to fishing.  Yesterday I decided to try the River Trent for the first time this season, a different challenge to that presented by the smaller Teme and Warwickshire Avon that has taken my interest so far.  Rods need to go a bit heavier, though with the rivers a such a low level I decided the 1.75lb test would probably be up to the job.  The swim-feeders were a different matter and the 60 gram weight was increased up to 110 gram and even this was probably at the bottom end of the range to be used.  I decided that my current tactics of pellet on the hair and a pellet mix in the feeders would be ok for this session, so off I set on the 50 odd miles to the river.

I arrived to find it at as low a level as I had ever seen, streamer weedbeds could be seen where they would not have been visible before, and in many areas the river bed was exposed as the water levels had dropped by such a large amount.   It is one thing to see the effect of low water conditions on the upper reaches of rivers like the Teme but when the middle section of the Trent is suffering it makes one wonder where that could lead to in years to come.  Still, the fish are still there so I set about trying to catch one of the barbel that were my prime target.  The sight of those streamer weedbeds gave me an advantage in that I could drop my bait more accurately in the clear channels that could now be seen, far better that the chuck and chance that normally goes within the section I was now fishing.  A angler I knew, fishing up river from my position could be seen playing a fish, I came to the conclusion that it was a good one, so having reeled my baits back in I made my way up to his position where I found that he had indeed caught one of the better specimens.  At 13lb-11oz it equalled my best for this river, but for this angler who fishes the Trent on a very regular basis, it was still some way from his best.

Returning to my swim with a little tinge of green in my eyes I thought that at least it was an indication that the fish were feeding, also that the barbel would be interesting to catch later in the season when it could easily gain a pound or two in weight.  Unfortunately the hours passed and it seemed I would return home with a blank results pad, but then with dusk just decending, the rod came to life and I was playing an obvious barbel.  Even with the low water conditions there was still a quite powerful flow on the river and this fish took full advantage of it.  It came to the net, and when weighed it showed a pleasing 8lb-7oz, a good start to my season on this exciting venue. 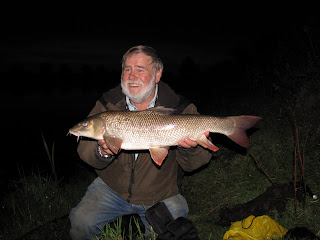