I had arranged for a trip to the sturgeon lake for my birthday treat to myself in the hope of hooking into the 60lb+ fish that swims there.  The day was overcast and there were a few light showers but overall it was a good day to be fishing.  Just one rod and I had taken two baits, Bacon Grill and Salmon fillets both of which have proven good at tempting this prehistoric monsters.

I cast the float to settle in a nearside gulley where I had previously caught and sure enought it was not too long before it slid away.   I stuck and it is as if the fish is not too sure what has happen, there is a delay while he makes up his mind and then zooms off down the lake.  Tremendous power and one hell of a scrap later I land a nicely propotioned fish of 27lb-12oz.  During the day I had quite frustrating chances where the float would disappear and the strike hit fresh air but I did get two other 20's with a best at 28lb-13oz.

Disappointed when another angler on the lake caught the big fish at 62lb-9oz, his scales packed up so I weighed it and know the weight was correct.  That fish has increased by 5lb or so in mid April when I first went on this lake and saw it caught that day as well.   No more trips until August when I'm back there with Mervyn, problem is it will be too late to include in my new book by then should I catch it - never mind it will be the first to go into the next book. 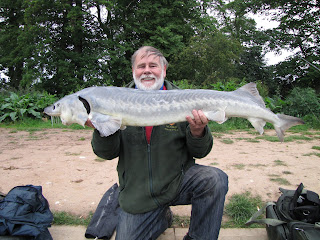