Having completed the double of barbel doubles on the Trent we are on a roll, two out of three rivers with the challenge target completed, more than I expected and I know it cannot last.  The next target river is a Trent tributary, the River Soar, small and plenty of character with a number of very good barbel waiting to be caught.  With the Trent falling we were hopeful the Soar would be in perfect trim and yet again we could fill our boots in ideal conditions.
The swim location on this venue involves quite a walk and in the now blazing sun I was totally snookered by the time we got up to the area to be fished.  Having done quite well so far I left the two lads to take first choice of swim and then located myself in one of the remaining choices.  The three swims had done us proud last year, but I quickly realised that my choice was no good.  The overhanging branches had grown well down towards the river and now once darkness fell it would be a mine field of snags on each cast; I had to move further down the river.  Although I am a member of this club and have fished here several times this would be a new area for me since I had always stayed towards the weir run, now I was well out of its influence. 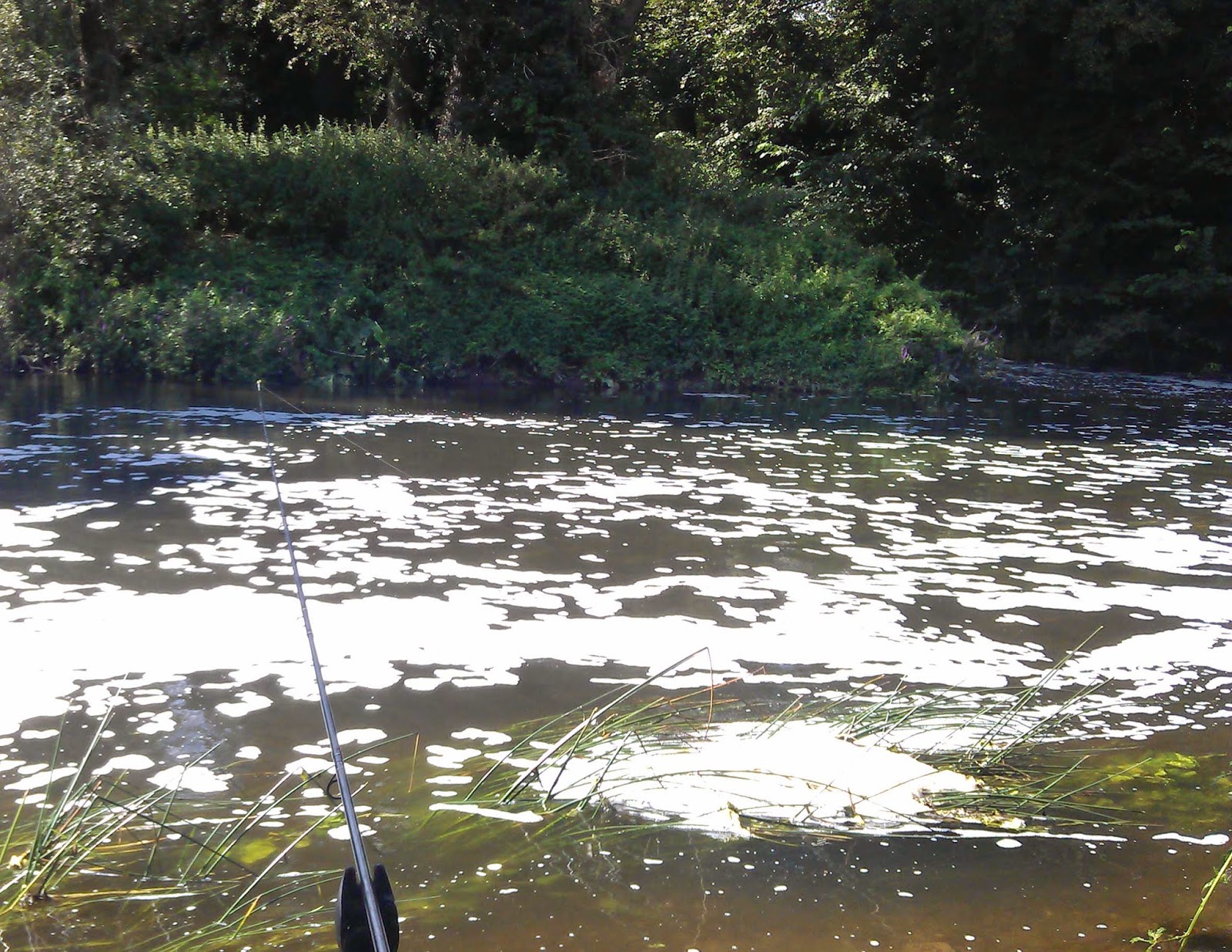 The foam from the weir shows here still.

With the tackle set up and hemp dropping done at the upstream end of the run on the far bank I could relax and I expected to wait for dark since all the fish so far had been taken at night or very early dawn.  That’s when I found out the swim was full of chub, mostly small but two or three would have been about 4lb or more.  Then I added a bream of about 6lb and finally a daylight barbel of 6lb-10oz.  As dusk fell I took another two barbel of 6lb-11oz and 6lb-15oz then about 11:00pm I thought I had the double, but it proved to be slightly under at 9lb10oz, pleasing and at least the barbel were feeding. 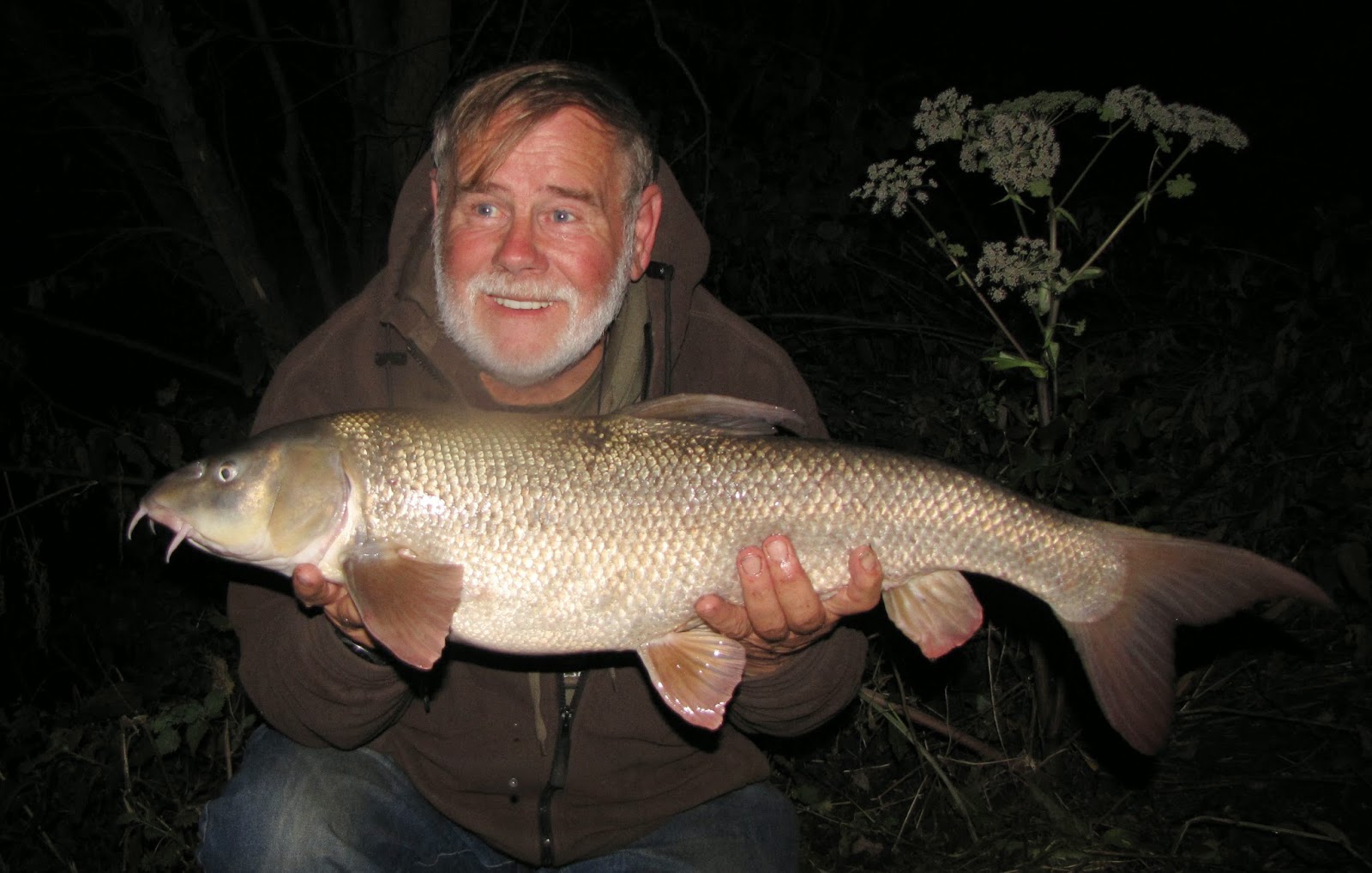 Following that I had a short wait but then another 6lb type barbel was quickly followed by the hoped for double with a fish of 10lb-11oz.  I phoned Paul to take photos and he came along with Jerry, some of their comments about jam and luck and things like that could take up quite some time, but it did hold some merit since lady luck was definitely on my shoulder.  It was now just coming up to midnight and by the dawn I had caught 8 barbel with the last one going a pleasing 7lb-7oz. 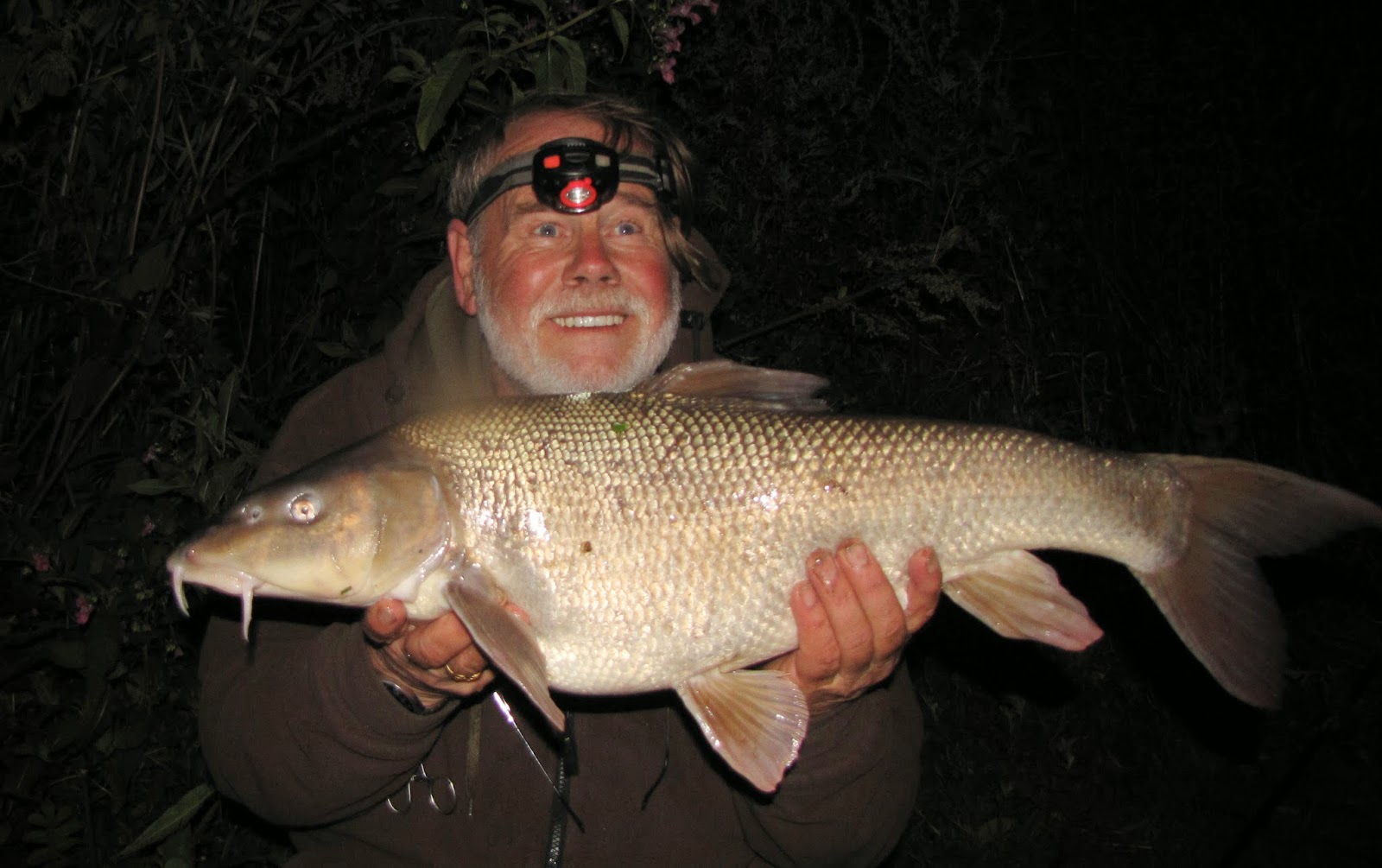 Meanwhile Paul had lost two fish, one with a cut off and the other broke him when his main line snagged on a grommet on his alarm and the fish broke his line before he could clear the snag, that’s bad luck again.  Jerry had tried hard but his result was a disappointing small barbel, last year this venue had given him a 10lb plus fish along with a 12lb-10oz specimen, lady luck was not with him at the moment.
Yet again we hit the road, this time towards Peterborough and the River Nene on one of its many backwaters.  Thanks go to Peterborough and District AA for allowing us to fish their water during the challenge.  I have a book but neither Paul nor Jerry travel to this area and hence needed the permission.  The river is still up and slightly coloured from the heavy rain we had Sunday night and I’m sure this was having a very positive effect on the barbel fishing.  Mark Smith the local bailiff had been in touch and with the river very low and clear the fishing had been very patchy.  Now we were hopeful and when we met up about midday he told us that a lad had already caught a double of 11lb plus, one less for us to catch, but a positive sign.  I set up in a swim while the lads went to a local tackle shop with Mark for a few bits.  Whilst there they were given a nice contribution towards the fund on behalf of the club, a big thanks for that as well.

Meanwhile I had caught a nice chub of 4lb-8oz and just as the lads returned I hooked into a barbel.  I was fishing close to trees and not being sure of the snag situation I hung on to the fish giving him no line but for no apparent reason the main 12lb line snapped.  Very unusual that and it definitely should not have happened, somewhere along the way I had got damage on the line that allowed him to escape, annoying to say the least.
The general idea had been we would rove round for most of the day but settle into our main choice of swim for the dusk session.  I made a move into a swim on a slight bend and put the two rods out, one under the nearside bank and the other over the far side alongside the cabbages that were showing just under the surface.  Both banks had a good stand of bulrush beds which are always a good indicator of a gravel bottom and the suggestion that barbel might be in the area.  After what seemed to be a very short time my nearside rod sprang into action with a screaming run and yet again I was playing an obviously good fish.  Playing a big barbel does remind you why we fish for them, power and speed with just the occasional flash of bronze as the turn near the surface; this is certainly why I love them.  This time the tackle held and I landed a big fish that was to weigh in at 10lb-14oz, lady luck was giving me full measure for this trip.  Having made the fish safe to recover I moved out onto the path that runs behind all the swims and there was Paul right on queue moving from one swim to another.  I knew he had been right at the far downstream end a little earlier so yet again just that touch of luck for him to be here when I needed him.  That fish was my first double off the River Nene and it took my different river doubles total to 24, an extra bonus for me. 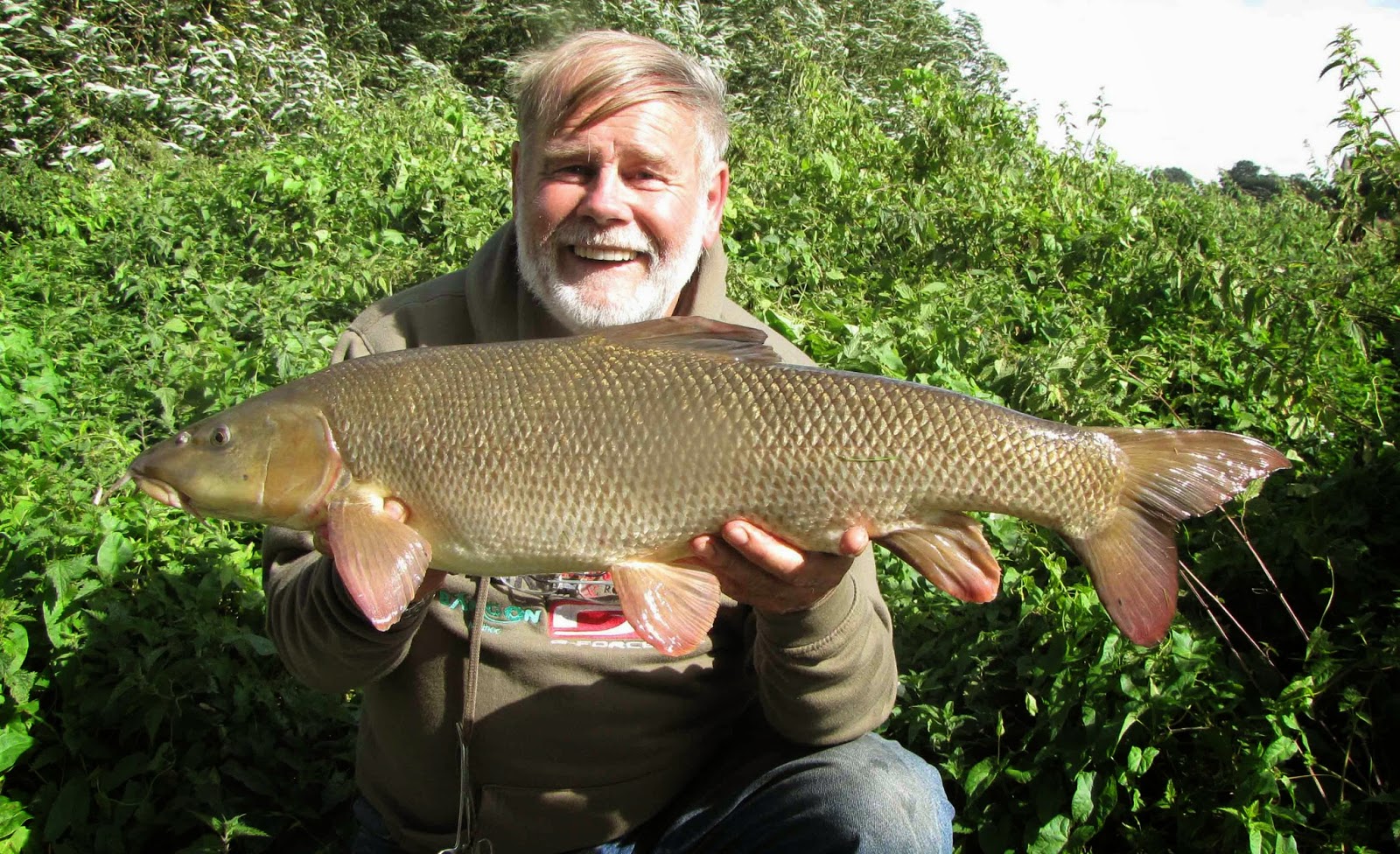 Having done 6 doubles off 4 rivers just missing out on the Dove, I had decided that I would not stay on too long and well before dusk I bid the lads good luck and headed home.  I would be on the Warwickshire Avon the next day as planned, but a night in bed would be nice.  It was pleasing to see the lads results in that Paul caught the largest fish on that length of river at 14lb witnessed and photographed by Mark, while Jerry finally caught three barbel up to a useful big 8lb fish but better was to come for him.
Next day saw me on my local river the Warwickshire Avon and although you can never be sure I was hopeful of at least catching barbel.  The swim I intended to fish allowed two totally different methods to be used at the same time, although all my fish so far had fallen to Source boilie I was going to fish one of my rods on casters fished over a bed of hemp.  As soon as I arrived I loaded a pint of caster into a pint of hemp and proceeded to bait drop the mix into the swim.  I did not intend to fish this line until three or four hours had passed though I would be bait dropping at regular intervals.  This is of course the classic ‘bait and wait’ method and I’ve caught numerous barbel on the technic.   In the meanwhile I would fish both the rods on Source out in the middle to far river and we’ll see how the two methods compare. 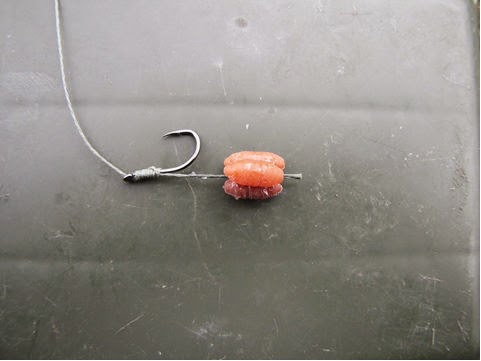 I did have to wait a little while but you never know if the swim has been fished the previous day still at last I got the screaming run and when I struck the fish had already reached a bed of streamer weed and he was well stuck.   I pulled, moved position although I could not get past the downstream bush, I gave it free line and eventually I just put the rod back on the rest with the bait runner on.  Nothing seemed to be working so I resorted to the last tactic of lifting the rod in a series of sharp jerks hoping to break through the steams of weed that were holding him.  All the time the rod is held as high as possible and fortune smiled as the fish came clear and I could play him in the normal fashion.  Just out of interest I did weigh him and he went 5lb-15oz, if I had lost him I’m sure he would have been larger.  Again quite a long gap before the next bite and it was on the caster bait producing yet another 6lb type of barbel, I’ve had a good number of those on this challenge.  When I hit the next bite, again on caster, I knew it was a better fish and it trundled round the swim refusing to come to the surface.  Eventually of course I did get him into the net and turned round to find a fellow angler who had stood watching the battle.  The fish was weighed at 10lb-6oz, pleasing for me as it completed another river, and pleasing for the other angler who had only just joined the chub and that was the first barbel he had seen. 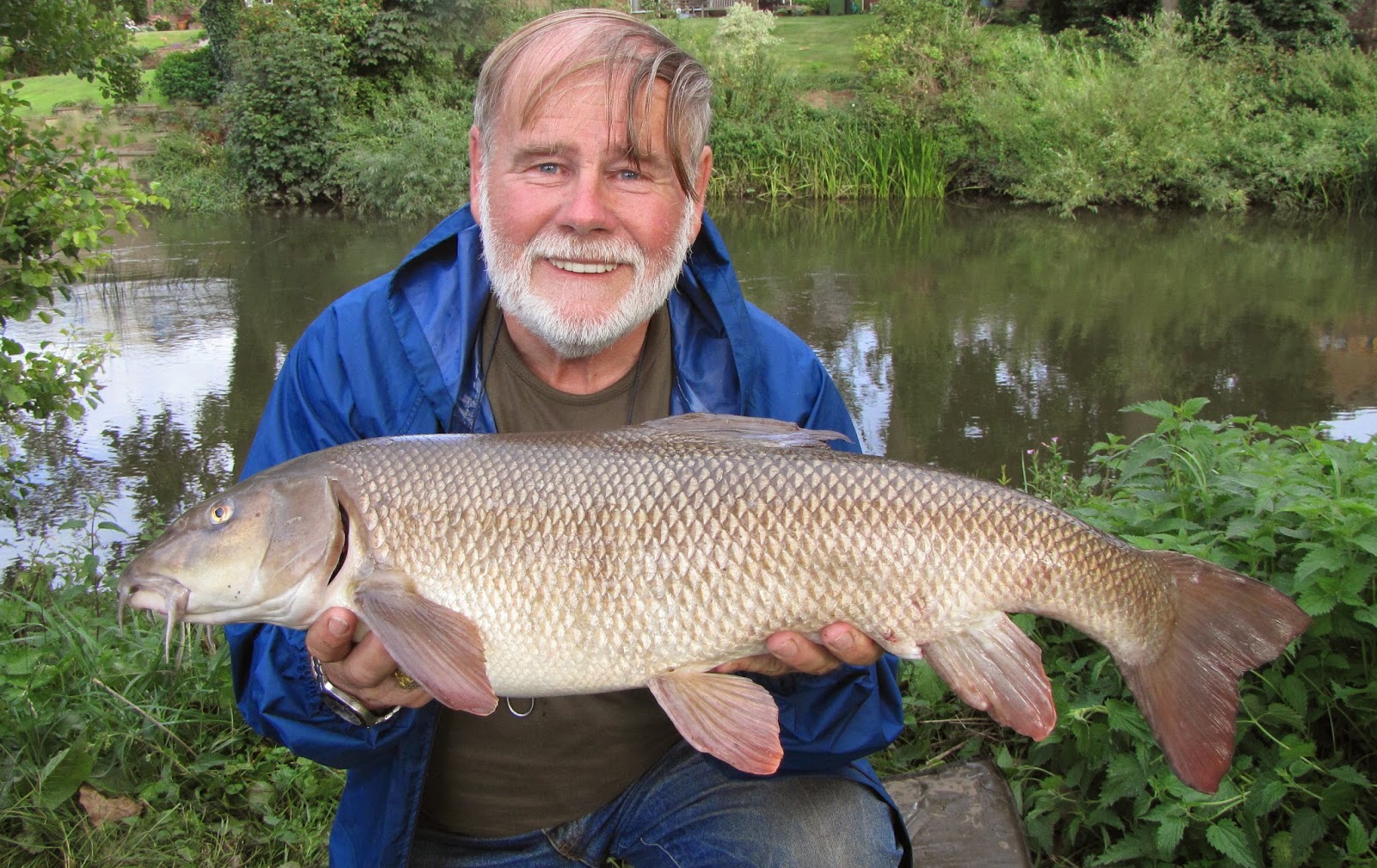 The challenge has been just that, success and failure in equal measure and my challenge ended shortly after that with my last capture on the boilie with the fish going 9lb-4oz.
Meanwhile Paul had got the real cherry off the River Lea at the King’s Weir Fishery when he caught yet another pb of 15lb-2oz.  The lads will carry on and I’ll keep watch with interest but that’s me done for this year.