On Monday I thought a day on the River Nene would be a change even though I knew the conditions were not very favourable, so off I went.  Travelling nowadays usually means I either go early to beat the works traffic or go after 9:00am to allow it to clear, with those poor conditions I decided on the later time and I would fish through to dusk.  It was very hot in the blazing sun such that in the end I had to seek the shade of a nearby tree.  I fished pellet on the one rod and changed between Source and Crave boilies on the other.  Plenty of chub between 0.5lb and 3lb, but the barbel did not show.  I did put a piece about the number of white butterflies about onto Facebook and that got a little bit of reaction, always a sign of poor sport when you resort to that. 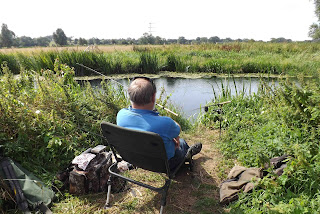 On the Nene backwater just melting. 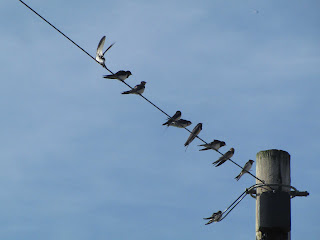 Now it is Wednesday and I’ve been thinking of a return trip after the sturgeon, a bit more expensive for the day ticket, but with big fish available there just might be some extra special sport.  These fish look prehistoric and fight like the devil was after them, having said that they do appear to be pretty stupid and it’s not unknown for the same fish to be re-caught very quickly after being put back.  This inevitably causes a gross estimate of how many fish are present, you can definitely half the numbers quoted and it might only be a quarter, still I’m off fishing now.


With the sturgeon running to over 60lb the owner has put a few sensible rules in place and these are strictly enforced, very large unhooking mat, 50” landing net minimum [even that is too small since these fish do not bend or fold into the net as many fish will]. The 15lb minimum main line with fish friendly leaders is to look after the fish whilst it is being played.  You might think this is over the top, but when you hook one of the big ones you will be pleased that your tackle is that little better prepared.  These fish will take almost any bait but I’m going armed with two different meats that have proven their worth on different waters, time will tell here if they are a good choice.  My end rig is the 80lb braid that the eel broke last Saturday, but these fish have no teeth so it should be ok, a size 4 barbless hook will carry the matchbox size bait, sometimes on a hair and at other times directly onto the hook.


Having seen the sturgeon on crystal clear waters I know that their normal action is to continuously be on the move and generally they follow the outside contours of the lake in one never ending circle.  From this seems logical to fish baits within a rod length of the bank, just an underhanded flick to position your offering in their path as they pass, today was to start a little differently and give me a very nice welcome back onto the lake.  I had got up early in order to make the journey across to the venue and I arrived about 7am ready for a day’s sport if luck was with me.  The rods had already been set up so I merely had to put them together and get the bait out.  Here I nearly made a basic mistake in that I put the rods out before assembling the landing net, I use two nets for this, one a 6ft arms model purposely made for sturgeon and the other a 50inch standard net for the smaller fish since it is more easily handled.  I had put the big net together and was just about to deal with the other when my rod indicated action and I was soon playing my first sturgeon, great!  Once landed I left it in the net at the side while I got the scales, camera and that ready, before I could complete that the other rod went off and I was now playing a second fish.  While I could have landed this one in the same large net it would be inviting problems so while playing him I carefully, and with some difficulty, put the second net up so I could safely land him.  Bit of a circus, but I finally got him back to the net and he went in with some disagreement since he was not happy with be hooked.  The smaller of these two looked about 15lb and I did not weigh him having the two together, a quick photo and he was back in the lake to grow bigger.  The second fish proved to be 22lb-10oz and joins a list of over 30 fish of 20lb plus I’ve managed over several different waters, very pleased and I’d pleased even if now more are landed. 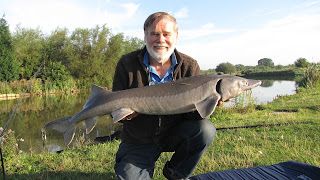 The smaller of the brace at about 15lb. 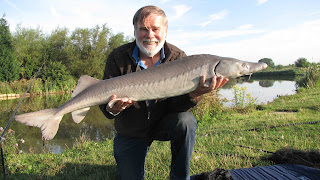 
It soon became apparent that even though I’d caught on the two different baits this was only because I’d caught so quickly and the small fish had not had the chance to attack the softer of the two offerings.  Now when I recast out again I found that it would only last about 5 minutes maximum with the bobbin dancing continuously throughout that time.  When the bobbin stopped moving, the bait was gone.  Fortunately the other bait was tougher and did resist their attention so at least I could carry on fishing.  The sun came up and began to melt me, this time there was no handy tree to offer shelter so I just had to grin and bear it.  Following that quick action it seemed that the lake died on me and the hours passed with little else happening.  I could watch the occasional passing birds or the vapour trails left by planes on their way to exotic places, all the usual pastimes when in this situation.   It was about 4:00pm when I got action again and I struck into a fish that came to the surface almost immediately to show me it's quite large proportions before the hook fell clear and it sank back into the depths leaving me despondent and thinking, ‘what if’.  One of the things you will soon learn with sturgeon is the number of times they will fall off the hooks, I’m convinced that almost without exception this is because they were foul hooked and hence I would prefer not to land them, they don’t count in my eyes since you did not ‘catch’ them.   Perhaps thirty minutes later I had another take and yet again struck into a fish that was obviously one of the bigger ones, would it stay on this time?  The question spun around my head as the fish powered its way about the lake refusing to give in to the pressure I applied on the tackle.  Eventually it came into sight and at last I could breath a little better as I could see the hook link coming from its mouth and not elsewhere on the body.  With the big net in use it was quite easy to get him into its folds first time and yet again I left him at the side whilst I prepared for its welcome.  Fortunately another angler had come round to watch and being a body builder he was better prepared to lift the fish steadily when it came time to weigh him.  A weight of 42lb-8oz was confirmed, my third largest and a very pleasing sight indeed.  Photo were quickly organised and he was allowed to swim off to enjoy a well-earned rest.  Talking afterwards, I did question whether this was the same fish I had seen just thirty minutes earlier, it was certainly a similar size and I had only nicked him with him getting off my tackle at the least resistance. 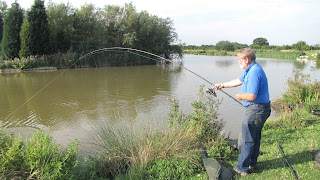 They can certainly bend a 2.75lb test rod. 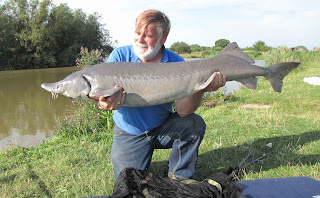 I settle back into my chair a very happy lad but the day was not finished yet with another fish of 23lb-14oz falling to my traps, with another possible foul hooked fish that did stay on for three or four minutes before coming free.  I had passed some of my successful bait to the lad that had helped and it was pleasing to photograph and 20lb-6oz diamond back for him shortly afterwards, he was on for the night and I would think he would get more fish before the end of his session. 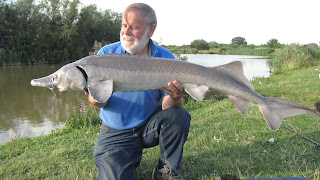 Last of the day at 23lb-14oz.
I’m off to the Kennet for Friday and Saturday to do a little guiding with a lad that brought the day on the Barbel Society auction for conservation work.  It will be interesting and hopefully I can help him catch his first ever double figure barbel. 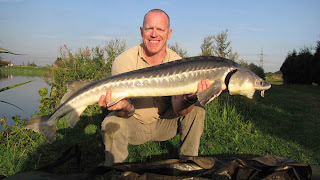 My helper with his 20lb-6oz diamond back specimen.
Posted by Travelling Man at Thursday, September 05, 2013