Return to the rivers and barbel.

This has certainly been the longest break without an update to the blog that I’ve had though that only suggests my lack of results and different things to write about.  As can be seen on the previous blog entry I had begun an eel campaign and then with the very high temperatures we have had over the last few weeks I stayed on that effort for longer than previously intended.  Following the first nights results with a 6lb and 4lb eel I thought I had stuck gold and indeed with those results I had, but disappointment was to follow.   I have now completed nine overnight sessions and have fished off three of the four banks available using different swims along each bank.  The depth has ranged from 10ft to 2ft, though in the main I have only fished the relative margins, perhaps 20ft from the bank maximum. 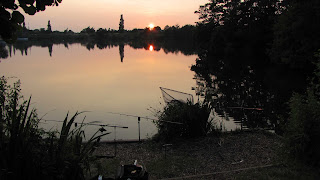 Eels, on your marks, get set, go!
The problem with eel fishing is the tackle is very basic, a running leger with a size 6 hook and a single worm for bait.  I put a pva bag of maggots on the hook and cast out having checked the bottom contours with a casting depth sounder [very useful bit of gear].  This has been my fishing from the last blog until this report and with just two eels between 2lb and 3lb there was not much to write about.  Hot – blank – not really an interesting write up. 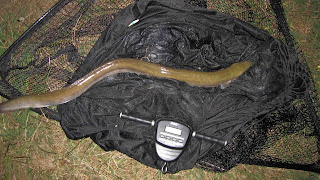 Small but perfectly formed.
Now with a bit of rain about I decided to try the barbel again, so I set out for the River Nene to chase yet another river double figure specimen.  The Nene is definitely a river with two distinct faces in the lower reaches that I was going to be concentrating on.  The main river is wide and generally slow and being deep quite difficult to read and locate barbel swims.  The saving grace from my point of view is the large number of backwaters, narrow with fast flows with lots of character in the form of rush beds and bends along with variations in depth, perfect for locating barbel swims. 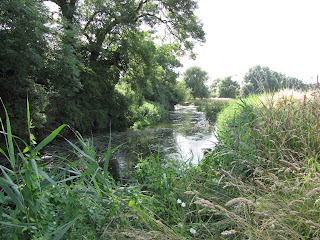 One of the many back waters on the Nene.
Not wishing to fish under the blazing sun I arrived late in the afternoon, still very hot but at least the sun would be losing some of its strength by the time I was fishing.  I had taken a variety of options but my main effort would be with castors and hemp so the first job was to bait drop a couple of pints of these two ingredients mixed together.  I could then sit back in the shade a wait for the fish to hopefully appear which I pleased to say they did.  Not with mad abandon that I have seen at times but at least it did show the swim held barbel and I was confident I would catch my first one off this river.  When I eventually cast out with three artificial casters on the hair rig I was hopeful of a take in fairly quick order but I was to be disappointed, nothing happened and it continued not to happen for an hour or two.  With an hour to go until dusk I decided to change ships and on went on to a pellet rig with two Elips pellets for bait.  It was noticeable that I started to get taps off the small fish but that is expected since they leave the artificial casters alone once they have tried them.  As the minutes ticked past the indications got more and more as chub moved in, I had left the hair quite long on purpose to lessen the chance of a chub hook up and it seemed to be working.  Then at long last I got the long awaited wrap round and I was playing my first barbel on this new river.  The fight was impressive and I certainly expected a larger fish than the 4lb-15oz bronze fighting machine that finally came to the net. 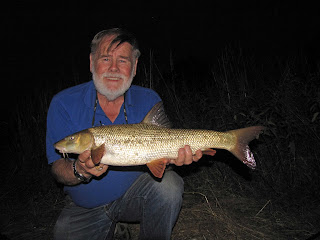 It was actually light but the flash gives it dark  4lb-15oz.
These fish will equal the scrap off the well names Teme Tigers and when a second fish fell to the same bait just minutes later I was well pleased with the session.  At 5lb-9oz this was slightly larger than the first but I was sure that over the next few trips I would get my chance of the double so I left well happy. 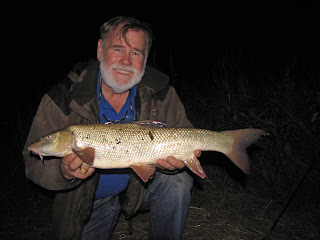