With May approaching fast my thoughts return to these beauties and I hope I can get some of this sport again.  This is last years blog of a successful session.

With this weather pattern that seems to be stuck in the late winter mode the fish would seem to be at least a couple of weeks behind in their development towards spawning, this can be an advantage as long as they will feed and that seems to be the rub.  My local tench water is fishing very patchy, but most of the time poorly, that is the report I get from all over the country, odd good catches and fish, but lots of blanks or low numbers of fish caught.  With this in mind I decided to concentrate on the crucians at Marsh Farm and leave the tench until a later date when they still might have the spawning to complete. 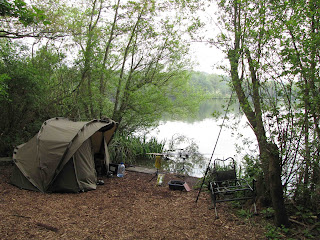 Home for a few days 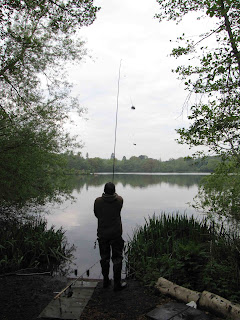 I’ve already given a report of my first trip and since then I’ve returned twice with varied results.  The weekly papers gave a very good report of a couple of great catches made in the recent weeks since the lake opened again on May 1, but don’t be fooled into thinking it’s easy, they were exceptional results.  The fish seem to be in small groups, get a swim with one of these groups in front of you and you can catch half a dozen crucian, but next door on either side of your position could be a total blank.  The tench are prolific and by and large the crucian anglers don’t count them at all since the size range tends to be quite small at between 1lb and 4lb most of the time.  The occasional nicely coloured rudd puts in an appearance and these can run up to around the 2lb mark to make an interesting diversion. 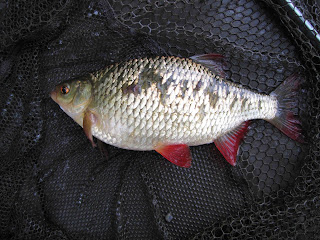 My return for a second session resulted in just two crucians with another one lost and I was beginning to wonder what I needed to do in order to get a reasonable result, but as with most times when you are not catching it was just a case of getting onto the fish.  These sessions tend to be about of 50hrs duration over three days and for my next try I arrived about 10:30am on the Tuesday and began a walk around to see what was happening so I could choose a swim for the next couple of days. 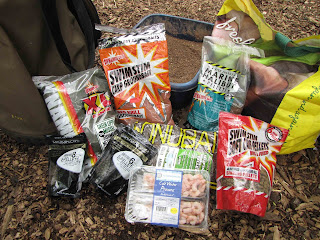 Ready for the crucians


One big advantage of staying on the same venue and within a narrow band of end rig change is that the same tackle will be used making starting up again simple.   The rods are still made up and everything is ready to go.  Mix up my feed to go into the swim and a method mix for the feeder, only slightly different since I want one to break up while the other needs to bind on the method feeder. 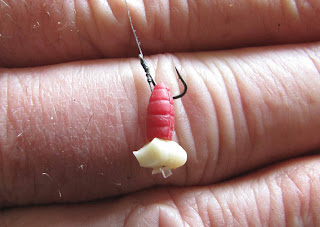 One of the hookbait versions.

I, along with many other writers have written thousands of words on rigs for the different species we fish for, that said the one I’m using now will catch nearly species very efficiently and without any complicated tackle needed to construct it.  When looked at the flatbed method feeder is only a slight variation on the helicopter rig used with a swimfeeder, both use a short hook link to place a hook bait next to the feed that goes out into the swim.  If I only had one method I could use this would be it.


As before, the tackle is Drennan 1.25lb test 12ft Avon rods with Shimano 5000RE baitrunner reels loaded with 6lb line.  30grm method feeders and size 14 Kamasan B980 hooks are used with 4 inches of 4lb Fireline braid to make up a killing combination.  My method mix is based on Dynamite Green Lipped Mussel method mix with a few extra bits added and the hookbait will vary from sweetcorn,  6mm soft pellet to artificial casters.


I had arrived to find most swims taken with just one left so it removed the need to choose, sometimes a good thing as I am a firm believer in fate and she certainly looked after me this trip.  The story on the bank was bad, several anglers after the crucians but only two fish caught over the previous thirty hours or more.  Even the tench that are normally such a nuisance were slow with just a few wetting the occasional net.  I was all set for yet another low score with a blank the most likely result.  With the marker float out to give a reference point the Spomb along with the other two fishing rods were marked up for distance using a suitable elasticated thread,  then the feed went out, a mix of groundbait, mixed pellets and corn and I’m ready for fishing.


I cast the two baits out and continued to set up my camp, I always have the rods out first unless it’s raining, I was still doing this when the bobbin rose and I struck into my first fish of the session, a terrific start even if it’s a tench but as it came to the net I could see the flash of gold – it was a crucian.  Not only a crucian but at 3lb-12oz it was my best from this venue beating a 3lb-10oz fish taken on Harris Lake over behind my current position.  Following that my sport continued fairly evenly through to dusk with fish of 3lb-8oz, 3lb-5oz being the better crucians and a number tench to a pleasing 6lb-3oz.  I brought the baits into the edge at either side of my swim once darkness approached, just off the bushes since although the depth is only a couple of feet they do move in to feed on occasions, but not this night and dawn broke without any interruption to my sleep. 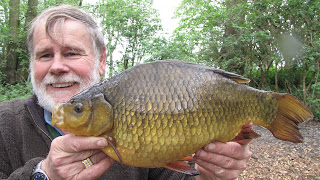 Very pleased with this 3lb-12oz crucian 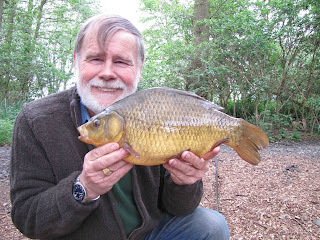 
The following day started well with a couple of early tench but then nothing until 2:30pm when a moderate crucian, at least for this venue, of 2lb-8oz came to my waiting net, sport was on again and it continued through the afternoon into the early evening.  Mostly it was those smaller tench between 2lb and perhaps going up to 5lb but there were enough crucians to keep me on my toes.  I kept a little feed going into the swim using the smaller of the two Spomb to just top up the swim follow ever second fish, it seems reasonable to assume that there are more fish out there than you catch and it needs a little feed around to keep them interested in coming back to the swim.  I say coming back since it does seem they go off on a route march and eventually return when you again catch a few fish before they move away again.  In-between the feeding spells the swim can seem quite dead until they return. 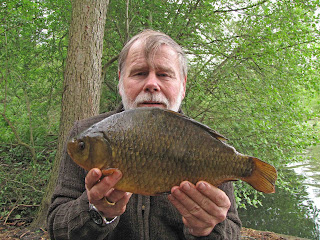 Yet another 3lb plus specimen.

My total of crucians slowly built up which seemed quite strange since most of the other anglers were struggling for a bite, I’ve been there over the last two trips so they had my sympathy, perhaps their turn next time.  That second night the close in rods did produce with a big 2lb crucian followed at about 11:00pm by a fish that left no doubt that it was not a crucian.  As I played this fish on tackle not intended for the job a friend came up to ask if I fancied a cup of tea, I declined the tea offer but encouraged him to help with netting the fish.  My net was one of the smaller pan nets not intended for this size of fish and when it finally came to the side after much argument it smashed the fork without mercy leaving us to net it by the lad holding the remains of the frame and guiding the fish into the net very carefully.  The carp weighed in at a very pleasing 23lb-6oz and the net was easily repaired with a normal metal spreader block after the remains of the original plastic spreader had been removed. 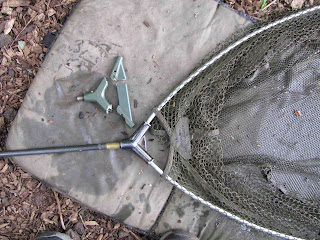 The net was not up to the carp's size. 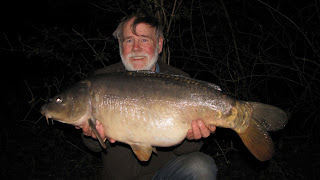 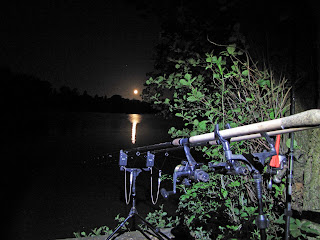 3:00am and with the setting moon all is well with my world.

The following morning went much the same and by the time I left to beat the M25 traffic I had raised the crucian total to twelve of which seven were over the magical 3lb bench mark.  My trip back home was through some quite nasty weather and it was the prelude for what was to come, I definitely chose the right days to fish but that is part of the equation of success. 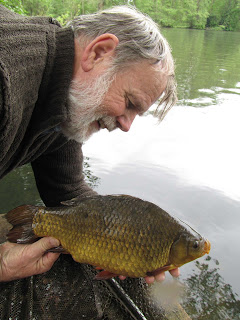