Last week was quite busy in that following the fishing on the River Severn on Sunday and Tuesday that had produced double figure barbel on both days, I had a trip south planned from Wednesday through to Sunday evening.  The basis for the trip was that I would help John Found with a Barbel Society fish in week-end on the Kennet, and at the same time have a trip on the River Test on the Thursday.  With an early start needed for that Test day I decided I would go down on the afternoon of the Wednesday hence the long session.  I normally only fish maybe four days a week but this would be a comparative marathon that would hopefully produce some interesting fish.


Mid-morning on the Wednesday I set out on the 100 mile journey down to the River Kennet and upon arrival I found the river to be in perfect condition for my barbel attack.  I had made a stop at Lanes tackle shop in Coventry and I picked up bait that I hoped would see my through four days on the Kennet and another day on the test.   Ten pints of casters and a gallon of red maggots – expensive but you only live once and I was sure that this would give me a better chance of success than either boilies or pellets as the main bait to be used.  As always when barbel are the target I had also boiled up a gallon of hemp and this would form the main attraction with the casters keeping the fish occupied once they arrived in the swim.  The maggots were mostly for the Test, where trotting through with maggot is always the approach to be used with great effect.


Well I start at the beginning and relate the Wednesday action; yes there was some which is not always guaranteed on this venue.  Arriving early afternoon I made my way to the river leaving behind my normal boilies and pellets having invested too much cash in the caster to ignore them.  I dropped my tackle off as soon as I reached the river, it seems to get heavier by the day but that is probably just age catching up.  Then I walked most of the length looking at swims and how the venue had changed since I was last here the previous season.  The floods had left their mark in washed out banks and fallen trees lying in the river, it looked quite inviting and certainly good for barbel.  The river appeared to be at what I would call normal winter lever, a little extra water and colour, but not excessive.  I chose a swim with a nice flow under my feet and with the tips passed on by John I knew there would be six foot or more of depth in that position, spot on for bait dropping accurately.  I know I have mentioned this many times but it does stand repeating, accurate bait dropping catches more fish, if you cannot do it then practice until you can since it will pay rewards later.  I mixed two pints of casters into the hemp at about 50/50 and then put about twelve droppers of the mix into the swim perhaps 4ft from the near bank, now I could set the tackle up at my leisure since I was already into the fishing mode and the bait could work its magic.


The day was quite pleasant and it was very nice to be out on the bank with that chance of a big barbel just waiting to be caught.  I am sure you know that feeling and once ready I bait dropped another five droppers before casting a bait into the swim.  Tackle was as I normally use, this being the Drennan 1.75lb test barbel rods with 12lb main line and the usual combo hooklink going to a size 12 Pallatrax hook.  The hair carried three natural casters super glued in torpedo fashion onto the hair, if small fish proved too much hassle I could change to artificial but in the event it was not required.  That was it, and now I cast out ready to wait for the three foot twitch that is so exciting to see, any size fish could be responsible.


I had hoped for a quick response but it was not to be and as I approached the 7.15pm kicking off time I was ready for a blank.  Extra mix had been put into the swim at regular intervals, perhaps in the order of every 45mins or perhaps the hour, but so far nothing had even twitched the tip an inch let alone three foot.  Then at 6.50pm the rod slammed round and I was into a powerful fish that gave the impression of being far larger than it eventually proved to be.  When the scales went to a very pleasing 11lb-2oz I was well happy with the first double off the river this season and I still had three more days to go on the venue. 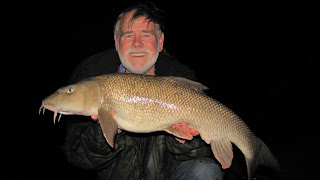 11lb-2oz.  It was still light but flash makes it dark.

Day two had an early start and John and I made our way down to the River Test via a very nice full English breakfast.  Once there we passed an hour talking with our host the now famous author and big fish angler Dave Steuart who has the most wonderful front garden you can imagine.  Again the river looked in fine trim though perhaps a little more of the weed had survived than I would have liked.  This of course limited some of the usual swims making trotting extremely difficult, but there were still plenty of other sections that would respond to the tactic.  The day was fine, warm and dry giving both John and I the chance to catch lots of fish, grayling to 1lb-8oz and roach to 1lb-4oz, not the 2lb of either species that are present in the stretch but I did see the big roach.  There are a number of big brown trout in the section since Dave has always insisted on the browns being returned quickly to the water.   To help these fish and for his own pleasure he has made a couple of sections of the bank out of bounds for fishing, it almost goes without saying that this was where I could see half a dozen roach that were the best part of big two’s or possibly even three’s.  With those browns present it was a fair certainty that we would lose the occasion monster on the tackle we employed for the roach, but never the less we did land fish to over 6lb having had a terrific scrap off them. 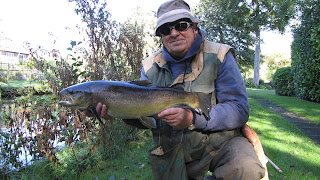 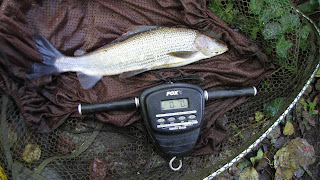 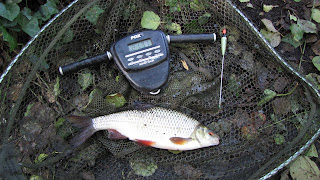 Along with a few of these. 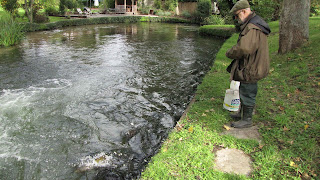 Dave feeds the trout in one of the banned sections.

Day three and I was back on the Kennet again this time on my own since John had other business to attend to.  No problem and there were several other anglers that came on during the day some just for the late afternoon having finished work a little early.  This time I chose a swim a little bit further down the river, a nice smooth glide going past a snaggy section on the opposite bank.  I decided to fish two rods, a maggot feeder fished across to the snags and the caster/hemp down along the nearside bank.  It seemed a long time from my early start until the 5:30pm time when at last I got the first bite of the day to the maggots, again one hell of a fight and yet again the scales showed 11lb-2oz.  A nearby couple of anglers came along for the weighing and to help with photos though I was fairly thoughtful it was the same fish as I had caught on Wednesday.  In actual fact a later look at the photos showed they were definitely different fish, not that important but still a nice touch. 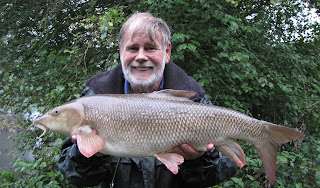 The second double at 11lb-2oz.
There was the Barbel Society fish in over the next two days but as I left the fishery on Friday evening the rain was just coming in and overnight it chucked it down.  Floodwater is not a problem for barbel but this was absolutely full of rubbish and many swim were impossible to fish.  Five minutes was a long time to keep your tackle in the water before it was swept away with crap on the line and the result was disastrous, two small barbel did get caught but that was the total for the two days.  I retired on Sunday evening happy with the two doubles, but sorry for the missed chances that rain gave me and all the fellow anglers that did not catch.  We did console ourselves with the thought that this is the nature of fishing and we do it because we enjoy it – but! 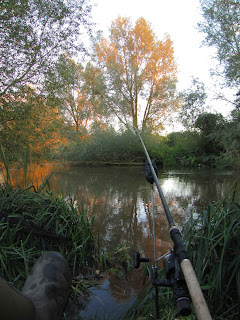 At least it was a pretty blank day for me.
Posted by Travelling Man at Tuesday, October 09, 2012