Had a few days bream fishing in the Colne Valley with Terry Lampard, a good social time, but poor fishing results as is so often the case with our pursuit of very big bream.  The pit does not have many of these ellusive fish, but there is one that could challenge my 17lb-15oz pb, and you must have a ticket to win the raffle!

Then today, [friday], I decided on a trip up to the River Teme, a phone call to Merv soon had him agreeing to go along as an observer.  He is recovering from a hernia operation two weeks ago, and is slowly going bonkers in the house starring at his facebook page.

Arriving at the river in the early afternoon we found it to be at a very low level with just a tinge of colour.  With Merv not up to any long walks I had decided on one of the closer swims to the car-park, so with me carrying tackle, and Merv carrying his chair, off we set for the short walk to the swim.

I made up a feeder mix of small pellets soaked with hemp at a 50/50 ratio, and then cast out a small pellet bait into a slack just the other side of the main flow rushing through into a pool just downstream of my position.  Over the next few hours the rod top hardly stopped bouncing as the chub played with the bait, but refused to be fooled into taking it.  Then I hit a smallish barbel, as it came to the surface I commented to Merv, 'At least I will not have a barbel blank,'  his reply was 'You aint landed it yet' and almost to the second the fish fell off the hook.  I loose very, very, few barbel to unforced hook pulls, but Merv timed that comment perfectly!

The pellet bait was not getting a result, and some five hours had passed with just that one chance, time for plan  B.  I had in my bag of tricks a small jar of very well glugged Dynamite Monster Crab 15mm boilies left over from last season.  They had remained unused this year, but I needed an edge so on one went.  Straight away the chub showed they liked them as well, but the long hair being used avoided hooking them until the rod slamed over, and the bait-runner reel gave line to the fish charging downstream.  I picked up and struck, firmly advising Merv not to speak as the rod took on a very satisfying curve.  The barbel of the River Teme give one of the best fights of any river, and this one played its part quite well.  This time the hook held and I brought in an obvious double, it just remained to see how big.

Scales and camera ready I lifted the fish from its resting spot at the waters edge, and soon had it on the fox digitals where a reading of 11lb-6oz glared back at me.  A new river pb, and with Merv taking the photos I knew the shots would be worthy of the fish.  Satisfied with that result for the day, we packed up for a conclusion to a memorable afternoon of barbel fishing. 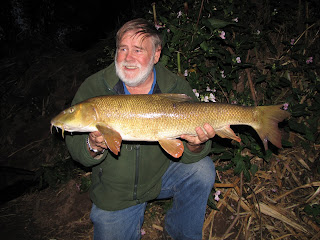 Yet another fish caught too late to go into the current book, but as mentioned with the Derwent double it makes a good start for the next book I write.  I expect the new books to be delivered on Tuesday, and those already ordered will go out on the same day.  If you have not ordered your copy yet, either go to the book launch on the 17th Sept as previously mentioned in this blog, or order through http://www.philsmithangler.co.uk/

Tight lines until the next time  -  Phil
Posted by Travelling Man at Friday, September 09, 2011